for a 1  Hour Workshop

Come Get it While It’s HOT

The Academy of Film, Television, Stage and Performing Arts is pleased to announce a 1  Hour Introductory Workshop on the Meisner Method of Acting, ‘Speech Level Singing’ developed by Seth Riggs and ‘Voice Over Production’ all for a nominal cost of $10.

Find out if this is the place to either start your career or push it to the next level!

Space is limited, so register today at (https://www.willygilly.com/upcoming-workshops.html) or by calling 845.820.8700.

AFTSPA is a 501c3 organization that trains and develops local talent to fulfill the growing demand for skilled workers in the 2.5 Trillion Dollar Broadcast & Entertainment (B&E) industry that is currently booming in the Hudson Valley.  It is AFTSPA's belief and overriding commitment, to recreate the world through the development of skilled talent and through the production of conscientious entertainment. 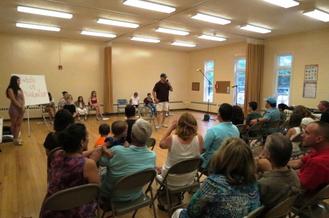